Four and a half years ago, a single mom moved to Rutland and started her life over from scratch.

After breaking away from domestic violence, she found herself in a new city with a few bags of clothes, two hours away from anyone she knew, with no job or connections and two kids under her care.

She found emergency shelter at the NewStory Center, which connected her with Rutland County's Homeless Prevention Center. There, an employee helped her map out a few initial, intricate steps into a system that eventually helped her achieve stability.

"My homeless prevention worker was able to help me do a lot of it," she said. "She understood, whereas I was just kind of sitting there baffled. I didn't know what to do."

With a $100,000 grant, a team of social workers in southwestern Vermont will soon begin a pilot project that aims to make a complex web of social services more accessible and easier to navigate to the people who need them most.

As soon as the mother, who requested anonymity, sought emergency shelter, she became part of a system that, as one social worker described it, "looks like a cat got ahold of a ball of yarn."

While caring for her family and settling into a new place, she was faced with untangling the yarn.

She worked with Reach Up, a state-run jobs program that gives temporary financial support to families in transition. BROC Community Action, home to several area food shelves, gave her access to food. She connected with the Rutland County Parent-Child Center, which provides resources for parents in poverty. Later, she qualified for Section 8, a housing-subsidy program that enabled her to choose housing suitable for her family.

Each of these programs came with separate qualifications and requirements, numerous case managers and paperwork. Challenges and backgrounds that bring people to the point of homelessness or poverty are diverse. But when they reach that point, a common thread forms: an extensive list of agencies to which they are beholden. Communicating effectively with case managers becomes a necessity - sometimes housing, a job or child custody is at stake.

The mother was glad, she said, to find a case manager at the Homeless Prevention Center who helped her find her way with some of the agencies. But people experiencing homelessness or poverty don't always find someone like that, local social workers say, and they can slip through the cracks of a complex, repetitive system.

"Every time you go in and meet with a new case manager, you've got to go over your whole mess again," said Steve Harrington, who works at the Rutland County Parent-Child Center. "They're reliving trauma every time they have to explain their story to someone else."

Consequently, many costly programs aren't making the kind of change they're designed for. Erin Oalican, director of the state's Reach Up program, which provides cash assistance to families in need, says without continued, streamlined support, many families who have gone through the temporary program once return to it later.

The program has shifted to a more holistic, goal-oriented approach in recent years, but many families still work with as many as six or seven other service providers at one time.

Oalican, Harrington and others are part of a team of Vermont service providers - and a growing number of social workers around the world - who see a flaw in that system.

Hillary Cottam, a British social worker who has lived with families in different parts of the world to understand why social services weren't helping them, described the current system in a Ted Talk as "a costly gyroscope that spins around the families, keeping them stuck at its heart, exactly where they are."

"What I would love to see is for families to be able to say, ‘this is what I want,' or ‘here's the person I want to help guide me on this journey to wherever I'm going,'" Oalican said.

A new approach to social work

"Families are experiencing deep poverty," she said. In recent years, Oalican has become interested in approaching social work holistically. She's become an advocate for a movement called "2Gen," or two-generation, an approach that looks at families more holistically.

Mary Feldman, executive director of the Rutland County Parent-Child Center, has spearheaded that approach on a local level, too. The center was formed to provide resources to teenage parents and their children, but Feldman took a bigger-picture approach when she took the helm four years ago. "We're not poverty services for poor people; we're removing the barriers that perpetuate poverty," she said. "We think that people are poor because systems keep them that way."

Feldman requires case workers from her agency to communicate with case workers in other agencies, cutting through bureaucracy that is often difficult for families to navigate on their own.

Denise Main, executive director of the Sunrise Family Resource Center in Bennington, has a similar approach. Along with providing early childhood education, which has been a cornerstone of the agency for 52 years, it offers a high school diploma program for pregnant and parenting teens, along with a number of other social services.

Representatives from these organizations have participated in a New England-wide initiative, called the Whole Family Approach to Jobs, that explores and attempts to expand 2Gen-centered social work. The goal, according to the organization's website, is to "improve family well-being while also increasing economic security through employment."

At a workshop in Providence, Rhode Island, the Vermont team met Marci Lu from the William J. and Dorothy K. O'Neill Foundation, an organization trying to end the fragmentation of social services. The foundation operates only in communities where family members of its founder live, and one of those family members recently moved to southwestern Vermont.

"He quickly noticed there were great disparities, particularly in the smaller towns and cities that have high rates of multigenerational poverty," Lu said.

In 2018, the O'Neill Foundation gave its first Vermont-based grant to Let's Grow Kids, an organization that works to expand access to early childhood education. The project created 370 new child care spots in the two counties.

Lu invited the Vermont team - which included BROC Community Action, officials from the Department of Children and Families, the parent-child centers and others - to apply for a grant.

Harrington, at the Rutland County Parent-Child Center, said the funding availability matched up with the work already being done locally, and with the need that exists in Rutland and Bennington counties.

"There was sort of a constellation of factors that made it ripe for doing this sort of project," he said. Picking a navigator

The Vermont team, awarded $100,000, proposed what's now casually referred to as the "navigator" project, aimed at providing one specific service that will cut through all the others.

Before the team outlines the details of the project, which will be in pilot mode for the next year, it will survey families who have relied on social services to determine what would help them the most.

In Bennington, Main said 100 families have already responded to the survey, which asks questions like, "Have you ever tried to access supports and services you needed, but stopped trying because you got discouraged?"

Another question asks, "Which supports and services have you needed and been able to access? Please check all that apply," then paints a picture of the potential complexity of one person's web, listing 13 different services, along with an "other" fill-in-the-blank option.

Harrington, who has spearheaded much of the grant writing and organization of the pilot project, imagines one likely solution.

Of all their case managers, a family could choose the one with whom they best connect, then ask that person to be their designated "navigator," who would be "tied into all aspects of the person's social services experience," he said.

As an example, Harrington said a social worker at the Parent-Child Center needs separate releases from the family in order to talk to case managers at Reach Up, or at substance abuse treatment centers.

But a navigator could try to foresee these issues and request releases in advance. "Or, somebody could conceivably give you a blanket release," he said.

The details still need to be ironed out. The new system would need to protect family identities, resist additional bureaucracy and avoid adding more work to an already heavy load for social workers. Most members of the Vermont team see the "navigator" approach as a promising solution to a problem that has infected the everyday lives of almost everyone they serve.

"If there is a point person that can help you navigate the system," Main said, "sometimes it can make or break whether a family is able to access the needed services to get on a better path."

If the project works, the group plans to pitch it to legislators and try to influence statewide policy.

Four years after she arrived, the single mother in Rutland is on the steering committee for the navigator pilot project, providing advice and instruction from her experiences when she was entering the community. She agrees that having a single point person is likely the right project to pursue.

"Being able to pick the person you can have stand up for you is going to make things a lot less stressful," she said. "It would be amazing, if we can get it done." 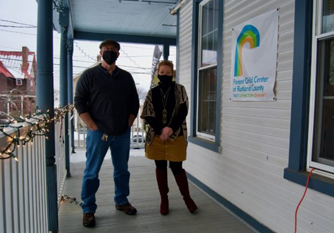